How Empaths Can Learn to Handle Other People Without Getting Overwhelmed 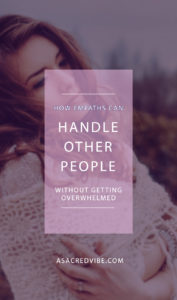 It’s happened many times before and I still have to be cognizant of it… being an empath means being able to know what another person is feeling and thinking. I often have empaths come to me for healing because they have shut down. They feel overwhelmed by other people in their life. Or they just don’t understand why things aren’t working out for them.

And recently, my daughter felt overwhelmed by a friend of hers. It happens all the time.

As empaths, we have to learn to recognize when we’re picking up on someone else’s feelings and thoughts so that we don’t believe them to be our own. So, how do we do that? See the tips below to see exactly how.

1. Be aware of your thoughts and feelings

When I lived in a house with a ghost, it influenced my thoughts and feelings almost every day. I would be so happy that I was ecstatic. I would be so sad that I would cry for no reason at all. When I left the house, I felt normal, like my energy was returning back to my old self.

Over time I came to realize we had a ghost that was doing this because it wasn’t only happening to me. People who came to visit remarked we had a ghost. My girls said they felt the same up and down feelings too for no. reason. whatsoever.

I knew I wasn’t crazy with all of these people commenting about us having a ghost. That began my journey into discovering my thoughts and feelings from the ones the ghost was trying to put upon me.

I began to notice and be more aware of how I was feeling. Whenever I felt sadness come upon me suddenly, I tried to trace it back to a thought I may have had. If I couldn’t come up with anything, then I knew it was the ghost. At that point, I would work with my crystal to release the feeling from my body instead of adopting it as my own.

2. Notice the energy attached to the thought or feeling

There’s different energy attached to the thought or feeling when it is not your own. It may be hard to notice at first, but I started wondering why there was this intense, heavy energy that was attached to random thoughts and feelings that came into my mind.

When I started getting up earlier than everyone else in the house and having some alone time to myself, that’s when I realized the heavy, intense energy type of thoughts and feelings were not mine. They were coming from my partner, who is a Manifestor, and they naturally have an intense, heavy, dense energy to them.

Plus, when he got up and came downstairs, that was when I would feel his energy and have thoughts and feelings come into my mind with that dense energy attached to them.

3. Send the thought or feeling back to the person

When I realized that it wasn’t, I started to return them back to their owner with a little prayer or blessing for them to work through and resolve their feelings on their own. I would simply say, “Is this my thought or feeling?”

If no, then I would say, “I see you. I am picking up on your sadness. I am returning it back to you with a prayer that everything will work out for you and you will resolve this to be happy again.”

Doing that usually works right away and gets the energy out of your space. Plus, sending the blessing or prayer will help the other person turn that sadness, or other feelings, around and resolve the issues they’re facing.

Sometimes dealing with people in person is a whole other story. If a person feels very angry about something, it can feel like an intense punch to the stomach for us as empaths, whether they’re angry at us or not.

What I do in the moment is to immediately ground my energy so that anything they say to me will go through me and into the ground. It won’t stick in my energy field.

And then I listen.

I let the person talk. Sometimes, without saying anything at all, they resolve the conflict themselves.

Sometimes they just want you to listen and say that you understand where they are coming from.

If the issue is directed at you, I’ve been able to tell the person I want to work out a solution with them to resolve the issue. Then we work together to find a compromise. That depends on the situation and the person though!

Most of the time I will attract people who just need to vent about their issues. Grounding your energy, focusing on helping the person find a resolution, and knowing that the energy isn’t focused at you will help you to take care of the person while also not getting overwhelmed.

These are the main ways I’ve been able to manage as an empath and it took me years to learn how by myself. But, you are definitely not alone in this.

What are some things that overwhelm you with the people in your life? Share below and I’ll offer my best tips to handle them as an empath.