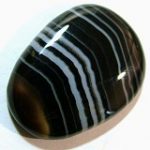 Black banded agate is naturally forming. It’s a form of chalcedony, which is a cryptocrystalline form of quartz, according to the Gem Society. It will sometimes appear as a solid color from afar, but if you hold it up to the light, you can often see it is translucent. Its connection is to the element of earth and it makes a strong grounding, centering stone for the Root Chakra. Banded agate, in general, is found around the world with a high concentration of them in Brazil, according to the Gem Society. Other banded agates are found in Uruguay, Mexico, Madagascar, and the United States (Gem Society).

Black Banded Agate is Useful to:

Black banded agate is a stability stone that assists in grounding and centering. In Chakra healing, it balances and stabilizes the Root Chakra, which assists in clearing out negative mental thoughts to allow greater peace and prosperity. Black banded agate also assists in clearing this negativity from the Aura to bring in more energy, joy, peace, and a balanced, healthy perception. It heals and calms extreme emotions of anger, grief, and anxiety. It encourages self reflection and introspection to be aware of your feelings and bring them to the surface for healing.

Mentally, black banded agate improves concentration and focus. It aids to alleviate anxiety and restlessness to encourage grounding, peace, and introspection. It can also help in clearing perceptions to reduce seeing delusions and embrace reality.

The divination properties of black banded agate is that it is very helpful for channeling information directly from the universe. It assists in clearing perceptions, which will help you to see more reality than fantasy in visions and in empathic feelings. It also assists in seeing people as they are, which helps to identify those who are true and those who are false and potentially harmful. It can also offer psychic protection and strengthen your aura, which would attract higher energy people to you. Black banded agate can be used for introspection to discover your feelings and also to balance out your perceptions. It’s useful in journaling.